Asus announced a refresh of its Chromebox lineup at January’s CES event with the promise of availability in the first half of 2018. The new Chromebox 3 models are available from at least one online vendor (thanks George for the tip!) and pricing starts at a reasonable $239 for the base model at Promevo.

That price will only get you an Intel Celeron processor but it’s a big step up from the prior base: This is the seventh-generation chip Intel launched in 2017 compared to the 2013 processor in the prior Asus Chromebox. 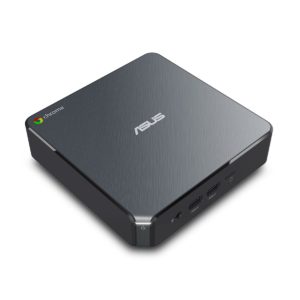 Other specs include 32GB of local flash storage with a microSD slot for expansion, 4GB of memory, five USB ports, HDMI out, 802.11ac Wi-Fi, Bluetooth 4.2 LE and an Ethernet jack. You’ll need to add your own keyboard, mouse (and display obviously) since it doesn’t appear Asus is including input devices.

For $429, you get the same device with two key changes: A bump to the seventh-generation Intel Core i3-7100 processor and one of the five USB ports is USB-C. A jump to $479 gets you this configuration with double the memory: 8GB.

Big spenders can drop $699 for an eighth-generation Intel i7-8550U model with the 8GB memory option. Note that all of the configurations currently shown provide 32GB of storage; there doesn’t seem to be an option with more capacity.

I think most Chrome OS owners lean towards the mobile experience of a Chromebook, but for desktop users, these appear fairly capable. However, you might want to consider the Acer CXI3 Chromebox line though as they will have 64 GB storage options and include input devices.

As far as Android app support, the new Asus Chromebox 3 doesn’t yet appear on the list, so we’ll have to see if Google adds them. They should be technically capable of running Android apps but unless you have a compatible touchscreen monitor you might not even care. Even if you do, reaching out to a desktop monitor for touch-capable apps isn’t ideal. For a business that wants to use Android apps in kiosk mode, however, such support would be ideal.