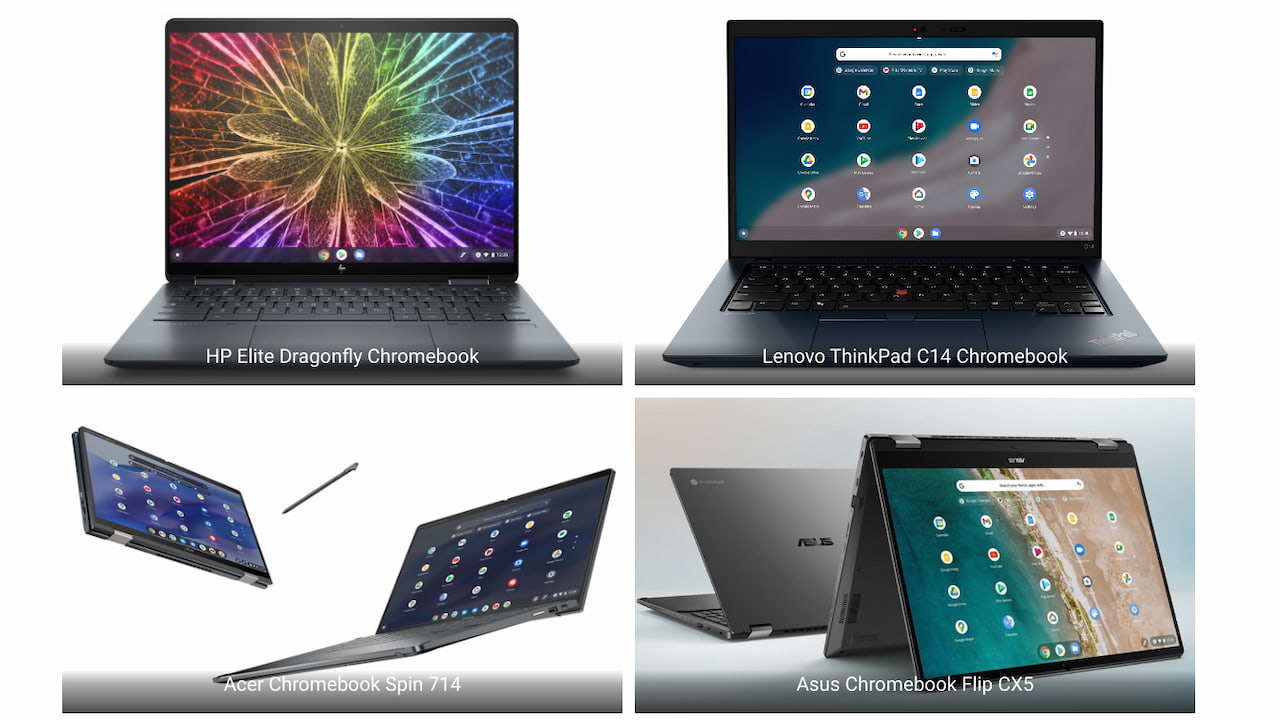 In the course of a few weeks, four new 12th gen Intel Chromebook models were made available for ordering. On paper, they’re more similar than different. But the prices are more different than similar. While we wait for reviews on each of these, this Chromebook spec showdown highlights what you’re getting for your money.

All with 12th gen Intel but some minor differences

Under the hood, two of the four Chromebooks use the latest Core i3 chipsets, while the other two offer Core i5 performance. That performance difference is likely to be negligible, however. The bigger difference may be in which Intel GPU is supported based on the chipset.

Note that all prices are listed MSRPs of currently available models, not discounted sales prices.

Clearly, each 12th gen Intel Chromebook has a very different price point. And again, I’m using MSRPs for comparison, not the recent $979.99 HP Elite Dragonfly Chromebook sale price, for example. Nor the $866.15 discounted cost of a Lenovo ThinkPad C14 Chromebook.

Sales will come and go, which could change your choice of device at that time.

What won’t change are some of the slight differences between these Chrome OS laptops.

If you want Iris Xe graphics to eventually play PC games from Steam, for example, the Acer is out of the running. Need more than 128 GB of NVMe storage? Then you’ll want to skip the Asus and HP. If you want an included, garaged stylus, you’ll have to pass on the Asus, HP, and Lenovo. Folks who want the largest display should first look at the Asus model. And if you want a haptic trackpad, there’s really only one choice here: The HP Elite Dragonfly Chromebook.

How to choose a Chromebook

Essentially, there’s a combination here for anyone wanting a 12th gen Intel Chromebook. You may not find the perfect configuration that meets every single one of your needs, of course.

My approach when selecting a Chromebook to purchase:

Again, there’s no “perfect” device that will meet everyone’s prioritized needs. But this strategy has served me well over the past 10 years of using Chromebooks.

In fact, not once have I ever bought a Chromebook that I regretted purchasing. Heck, I’m still using a 2018 Chromebook as my personal device. I knew in advance that even if it was missing some functions or features, it met my most important needs.

And just to reiterate: While you might “have to have” a Core i5 or i7, don’t overlook the Core i3 options in a 12th gen Intel Chromebook.

Unless you’re coming from a last-gen Core i7, I suspect you’ll see a massive uptick in performance with one of these four choices. The overall difference between a current Core i3 and Core i5 won’t likely be noticeable, save for synthetic benchmarks.