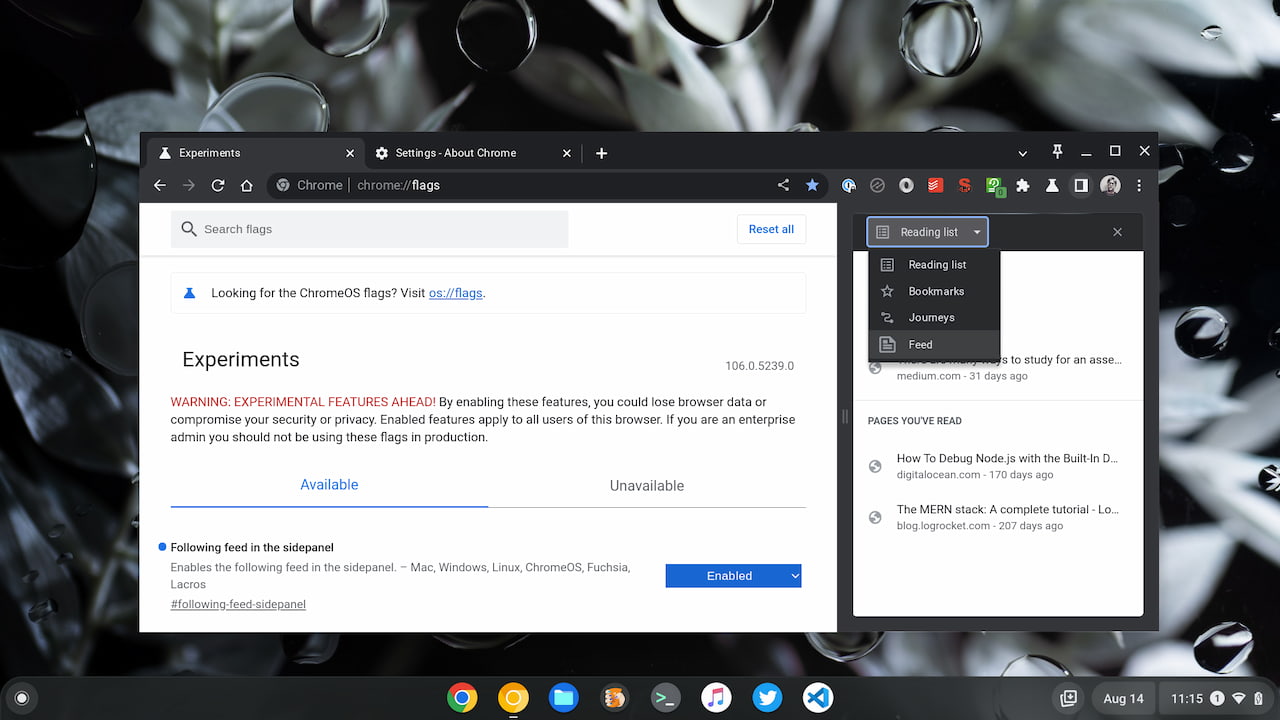 I’ve been digging deeper into RSS lately, so this article from Chrome Story is rather timely. Dinsan reports that the Side Panel in both the Chrome browser and ChromeOS is getting a “Feed” option. The question now: Is Google Reader coming back?

As a refresher, Google Reader was depreciated (a nicer way to say killed in software words) back in 2013. It was a fairly popular RSS web app that provided a way to follow website feeds. I was a heavy user of the app and among the many who weren’t happy to see Google pull the plug.

But maybe it’s coming back, of sorts. It’s difficult to tell, so let’s examine the evidence.

There’s an experimental feature flag in the ChromeOS Canary channel at chrome://flags#following-feed-sidepanel. This adds a “Feed” option to the other side panel actions, which are Reading List, Bookmarks, and Journeys.

I was able to add the option to my side panel, as shown because I’m using the Canary Channel of Lacros.

Unfortunately, the functionality doesn’t yet work. Navigating to Feed in my side panel shows a connection error. And I don’t yet see a way to add an RSS feed to the side panel.

Chrome Story is ruling out a full feed reader here:

“It will be tricky to incorporate an RSS feed reader into the side panel. So, let’s rule that out for now.”

I can understand Dinsan’s thought process here. The side panel is rather small for reading full-text RSS feeds.

However, there is an experimental feature I have installed that lets me adjust the size of the side panel. So, in theory, screen space isn’t really an issue from keeping Google out of the feed reader market again.

This doesn’t mean it’s a lock that we’ll see RSS feeds in the side panel though. Google sometimes plays fast and loose with standard words, such as the word “feed”. They could mean the RSS feed of a site or something else entirely.

In fact, the existing code for the Feed functionality isn’t clear that it will be using RSS or something else to create and display content. All I can tell at this point is that it will read and display a file called “feed.html”. It’s not clear what the input to that file is.

Indeed, the flag description says this feature “Enables the following feed in the sidepanel.” Following to me and following to Google could be different things entirely.

I did a little more digging into supporting code though and I believe that when Google says “feed” it does mean the RSS feed. Here’s the clue:

Where I read “web feed”, I think RSS feed. Not a Google Discover feed, not a Google Follow feed, but an RSS feed. While I can’t be 100% confident, I think this clue strongly suggests that yes, Google Reader is coming back. Maybe it’s not quite the Reader of old since it would be integrated into the browser, but still.

Personally, if I’m wrong on this, I’ll be highly disappointed. I don’t want an algorithmic Google list of interests in the Feed tab. I want to pick and choose the sites I want to follow through RSS.

Update: There’s additional information and more evidence that RSS will be supported in the Chrome and ChromeOS Side Panel.

10 thoughts on “Is Google Reader coming back?”